The Halladay Lab is part of the fastest growing major at its University, Neuroscience at Santa Clara Univeristy, and is housed within the Department of Psychology.

the Brain and Behavior Research Foundation. The award will fund two years of research related to the neural and behavioral deficits resulting from early life trauma.

Research conducted in the Neural Circuits, Systems, & Behavior Lab, headed by Dr. Lindsay Halladay, is focused on understanding the physiological processes by which neural activity produces behavior, and more specifically, how dysfunctional circuitry leads to aberrant behavior.  NCSB's objective is to better understand how reward and aversion circuits converge and interact.  Using a combination of in vivo electrophysiology, behavior, and genetic tools, the Halladay Lab's ultimate goal is to clarify how factors such as stress and alcohol exposure alter neural signaling and influence circuitry in a way that promotes addictive-like behaviors.

The Halladay Lab has a new paper out, in Behavioural Brain Research, detailing the life long social behavioral deficits induced by early life stress and the finding that low dose ethanol counteracts some social deficts, specifically in adolescent females.

In collaboration with colleagues at the NIAAA and University of Miami, Lindsay Halladay published a review article in the Journal of Neurochemistry, Advances in understanding meso‐cortico‐limbic‐striatal systems mediating risky reward seeking.

In collaboration with researchers at the NIAAA, the Halladay lab published exciting new work in eLife, identifying a prefrontal-bed nucleus of the stria terminalis circuit in the regulation of fear under during uncertain threat. This work has clinical implications for understanding neural underpinnings of trauma-related disorders.

The Halladay Lab published a new study in the Journal of Neuroscience Research, highlighting the bed nucleus of the stria terminalis as a potential mediator of social behavior dysregulation following early life trauma.

Congratulations to RA Max Bjorni for being awarded a scholarship from the Barry Goldwater Scholarship and Excellence in Education Foundation!

The Halladay Lab published a study in Learning

distinct neural populations in the extended

In an interview with Elemental, Lindsay Halladay spoke about her recently published findings on the neural circuits regulating drinking behavior in "The Latest Findings on Why It’s So Hard to Quit Drinking."

Lindsay Halladay and colleagues at the

NIAAA published an article in Biological

The Halladay lab traveled to Chicago, IL to present their work at the annual meeting of the Society for Neuroscience. Max Bjorni received a travel award from the Faculty for Undergraduate Neuroscience. Other presenting RAs included Hannah Henderson, Natalie Rovero, and Alex Quan.

Lindsay Halladay traveled to SRI International to present the lab's research on neural and behavioral regulation of ethanol-seeking behavior.

Max Bjorni was selected to receive a competitive travel award by Faculty for Undergraduate Neuroscience (FUN) to present his research at this year's upcoming Society for Neuroscience meeting in October. See you in Chicago!

The Halladay lab attended and presented four posters at the Bay Area Brain Symposium, co-organized and hosted by Lindsay Halladay, the Vice President of the Bay Area Chapter of the Society for Neuroscience (SFN). RAs Max Bjorni, Natalie Rovero, and Alex Quan brought home their second 'Best Poster' award in just two weeks, for their work on adulthood behavioral and neural consequences of early life adversities on reward seeking.

Halladay Lab RAs presented their research at the Western Psychology Conference for Undergraduate Research, where Max Bjorni, Natalie Rovero, and

Alex Quan  won the award
for best poster. Their work

adversities such as early life

DeNardo Science Scholars Malia Belnap and Max Bjorni were selected to present their research on neural correlates of social behavior and ethanol reward preference at the Sigma Xi poster session at SCU.

Max Bjorni was honored with the

award, a 2 year grant to conduct

Lindsay Halladay joined the Editorial Board of the Journal of Neuroscience Research as an Associate Editor.

Lindsay Halladay heads to her alma mater, Cal State San Bernardino to speak about her research and career path as part of CSUSB's MARC program.

for DeNardo Science Scholar Award, a 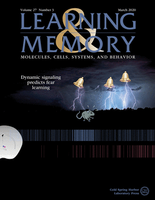 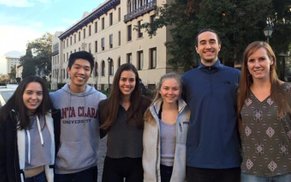 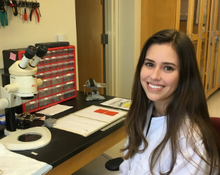 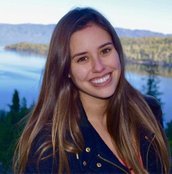 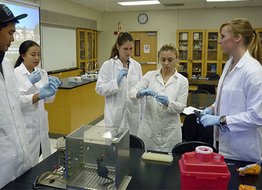